“The company was the star act of our series. The audience loved them.
In fact, they were on their feet before the final strums.” – Maria Centrella, PCPA Theaterfest 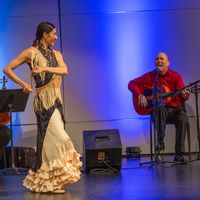 Flamenco can be described as the “Blues” of Southern Spain. Traditionally, flamenco was the outlet used by the poor and oppressed gitanos (gypsies) to express their emotions, ranging from grief to blissful celebration. Although the early history of flamenco is not well documented, it is accepted that flamenco evolved out of the traditions of several cultures, including Gypsies, Moorish Arabs, Jews and the indigenous people of southern Spain.

The art of flamenco is borne through collaboration. ”A lot of audience members usually don’t realize the amount of communication and interaction that occurs in a live flamenco performance”-says Chris Jacome. The haunting songs and beautiful melodies of the cante (flamenco singing) animate the dancer. With the dancer’s movement and rhythm, the guitarist finds harmony, adding dynamics and musical support, each artist inspiring the other, creating a twisting tornado of duende (magic, inspiration).

While staying true to these profound traditions, Jácome Flamenco explores new frontiers with their production, TABLAO, a thrilling show with two flamenco dancers and the breath-taking accompaniment of guitar and vocals. Want to feel like you're in a private flamenco show off the beaten path in a rural pueblo of Andalucía, Spain? Then get a ticket and be transported to another world, of dance, song and duende...oh, and be prepared to yell, '¡Olé!

Internationally acclaimed touring company, Jacome Flamenco, was formed in 2003 by Chris Jacome. The company has performed to sold out crowds in Spain, Indonesia, Mexico and Canada, and was featured at Jazz at Lincoln Center in New York City.